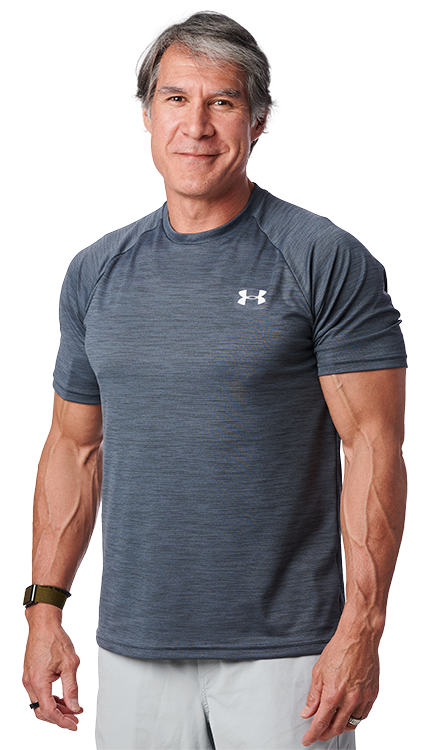 Fitness has been a big part of Steve’s life for over the past 40 years. Whether it was training for sports, trying to get bigger and stronger than his brother, or coaching his high school lacrosse team, the gym was a comfort zone for him.

Unfortunately, improper training, wear and tear, and arthritis took a toll on his body. In 2018, at the age of 55, Steve had already had 2 major shoulder surgeries and a disc in his lower back removed, and was in need of knee and hip replacements. But, despite his body falling apart, he felt better than ever because after discovering food allergies were a major cause of his severe asthma, he was able to change his diet and breathe better than he ever had been able to.

With this new second wind in life, Steve started training again only to find out that he was now limited to no-impact exercising, and no overhead lifting. Knowing that rowing was an option for him, he purchased a Concept2 rowing machine and began working out on his own. He soon discovered the world of competitive rowing and that was all it took. Determined to become one of the best, Steve trained and learned rowing from some of the top coaches and athletes in the world.

Steve’s body not only was able to handle the low-impact movement of the rowing machine, but his entire body became stronger and began supporting all of the areas that were injured or damaged. As he got stronger and faster, Steve became more and more inspired and began training with the World Championships in his sights.

In 2020, Steve traveled to Paris France and won a silver medal in the 500M. In 2021, the races went virtual due to Covid-19. This had caused a record number of people from all over the world to start competing in indoor rowing. Continental Qualifier races were added and the number of rowers were limited to just a couple of the fastest from each continent in each category. Steve won the Americas Qualifier and went on to win gold and silver at the World Championships.

Steve knows first-hand how the rowing machine can change a life. How as a low-impact exercise it is available for almost everyone to participate in, and how it is arguably the single best workout you can do to increase cardio, strength, endurance and transform your body. Now, he wants to share that knowledge with you.

Steve has been certified as a rowing coach by Concept2, as well as Dark Horse Rowing. He is also an NASM Certified Personal Trainer.

When not rowing or coaching, Steve is a commercial photographer with Steve Tague Studios, a career he has had for over 30 years. He also enjoys spending time with his wife Mary, and visiting his 2 sons; Max, 25, and Dakota, 26, as well as Mary’s 2 sons; Charlie, 20 and Max (yes, we have 2 Max’s) 24. Steve also appreciates fine cigars and premium single malt Scotch whisky’s on occasion, but don’t tell his coach.

We'd love to send you information about our pricing

Enter your details below and we'd be happy to show you our rates and explain them in detail!